Concert with the Juilliard Orchestra

August 27, 2012 / George Stelluto / Comments Off on Concert with the Juilliard Orchestra

Conductors are always looking for opportunities, and sometimes they come in the form of replacing a colleague who becomes ill or incapacitated. Such was the case for my March 29 concert with the Juilliard Orchestra at Alice Tully Hall. My dear friend and mentor James DePreist fell ill about a week before the performance, and I was called to take over the remaining rehearsals and concert. While I was excited about the program, I was sobered by the circumstances that brought about this opportunity. Jimmy assured me he didn’t get sick just so I could conduct – typical of his courage and humor. 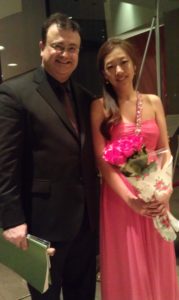 George with Jiyoung Lee, the cello soloist for the Schumann Concerto, after the concert.

The musicians in the Juilliard Orchestra are capable of mastering even the most demanding repertoire, but any orchestra can get tense when there is a sudden change in leadership on the podium. They were great: welcoming and ready. We had already worked together in the prep rehearsals for this concert – before Jimmy arrived – and so we were already comfortable with each other.

The trick in performing Schumann and Beethoven is to manage what I call the “Three P’s”  – “Passion, Precision, and Poise” in the right combination for each composer. Both these geniuses are stylistically demanding and require vigilant playing in which technique serves exquisite musicianship in a zen-like unity. The Walker is a beautiful, rich, and warm work, which played so well to the strengths of the Juilliard strings – SOUND! We had several rehearsals together before the dress rehearsal and it was a joyous experience to collaborate with the Juilliard Orchestra – going for sound, style, and sensitivity, as well as the “three P’s.”

It was a luxury to have an entire rehearsal to spend on the Schumann with the competition winner Jiyoung Lee. A wonderful cellist, she brought both strength and vulnerability to the concerto in an interpretation that was unique to her personality and yet true to the work. Even though he is a romantic, Schumann requires a sensitive approach, and Jiyoung’s excellent style was easy for the orchestra to emulate.

The concert was a great success. The Walker was at once solemn and yet warm. In the Schumann, both soloist and orchestra played as one, and I was so pleased by the quality and variety of expressive sounds the orchestra produced in response to Jiyoung. She was everything her considerable potential promised she would be – virtuous in both technique and artistry. After intermission, the orchestra played like young thoroughbreds – full of youthful passion and yet poised and razor sharp in their execution. Both capricious and profound, they played in the moment, and we could allow the muse to guide us in the Beethoven. Such an honor and such a joy.